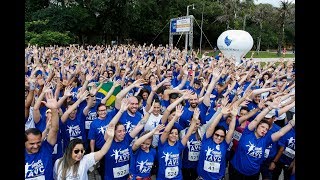 The National World Stroke Campaign in Brazil 2017 was organized by Brazilian Stroke Network, Brazilian Academy of Neurology, Brazilian Stroke Society and Brazilian Stroke Association.
The campaign put together neurologists, doctors from other specialties, other health professionals, health authorities, journalists, politicians and stroke support organizations. It involved 98 cities, in 24 out of 26 Brazilian States, with actions in parks, beaches, hospitals, bus stations an shopping malls to raise awareness on the population about stroke.
From October 21st to 29th we run the campaign with the WSC theme “What is your reason for preventing stroke?”.
It was created by Ana Claudia de Souza (fellow in Stroke Neurology from Hospital de Clínicas de Porto Alegre and Hospital Moinhos de Vento) and Leonardo Carbonera (Resident in Neurology from Hospital de Clínicas de Porto Alegre) the lyrics “10 Steps to prevent a Stroke” – Os Dez Passitos. It was created also a simple choreography for anyone to learn and dance during the campaign, including patients.
With Ana Claudia as the singer the song ruled the campaign in all country, with exibitions on tv, radio, facebook and youtube.