Woman films 'selfie' video whilst having a stroke, after doctors told her it was stress 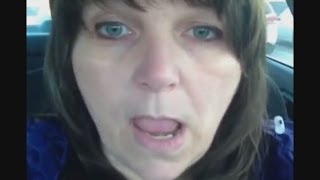 Subscribe to ITN News: http://bit.ly/1bmWO8h
Quick-thinking Stacey Yepes from Canada filmed herself on her phone whilst suffering a mini-stroke. After doctors insisted she was suffering from stress and sent her away, Stacey recognised her partial face paralysis and numbness in her arm return as she was driving, so she pulled over and grabbed her phone. In the video, she tries to lift her left arm with difficulty and says she finds it hard to point at specific things like her nose. Stacey also films herself following the advice of the doctors to simply breathe slowly in and out to manage stress, but the symptoms persist. After filming the video, she visited a different hospital from her first visit and was told by doctors she was having a mini-stroke. Further tests confirmed that she had a small blockage in one of the arteries supplying her brain. Report by Claire Lomas.

See our Biggest Videos of All Time: http://bit.ly/18ZACCf