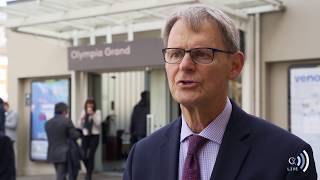 In the Acute Stroke Challenges session, Nick Hopkins talks to CX Live about the “significant increase” of incidents of stroke following cardiac surgery which is “much more common than previously thought”.

Ross Naylor and Peter Schneider debated the impact of new technologies and innovations making carotid artery stenting as safe as endarterectomy in the first 14 days after TIA / stroke. Naylor who spoke against the motion, won the debate.

Schneider discussed the “incredible promise” shown by new technologies such as TCAR and mesh stents and how changes to carotid stenting are “on the horizon”.

Naylor, however, argued that most of the outcomes published have been in patients who were either asymptomatic or had symptoms without any details on how long after the event they had occurred. Naylor said that data on mesh stents and flow reversal devices such as TCAR must instead be looked at in the first 7–14 days after onset of symptoms.