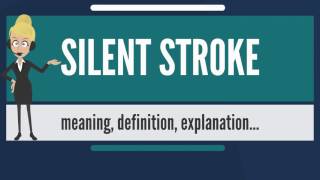 A silent stroke is a stroke that does not have any outward symptoms associated with stroke, and the patient is typically unaware they have suffered a stroke. Despite not causing identifiable symptoms a silent stroke still causes damage to the brain, and places the patient at increased risk for both transient ischemic attack and major stroke in the future. In a broad study in 1998, more than 11 million people were estimated to have experienced a stroke in the United States. Approximately 770,000 of these strokes were symptomatic and 11 million were first-ever silent MRI infarcts or hemorrhages. Silent strokes typically cause lesions which are detected via the use of neuroimaging such as MRI. The risk of silent stroke increases with age but may also affect younger adults. Women appear to be at increased risk for silent stroke, with hypertension and current cigarette smoking being amongst the predisposing factors.

These types of strokes include lacunar and other ischemic strokes and minor hemorrhages. They may also include leukoaraiosis (changes in the white matter of the brain): the white matter is more susceptible to vascular blockage due to reduced amount of blood vessels as compared to the cerebral cortex. These strokes are termed “silent” because they typically affect “silent” regions of the brain that do not cause a noticeable change in an afflicted person’s motor functions such as contralateral paralysis, slurred speech, pain, or an alteration in the sense of touch. A silent stroke typically affects regions of the brain associated with various thought processes, mood regulation and cognitive functions and is a leading cause of vascular cognitive impairment and may also lead to a loss of urinary bladder control.

In the Cardiovascular Health Study, a population study conducted among 3,660 adults over the age of 65.31% showed evidence of silent stroke in neuroimaging studies utilizing MRI. These individuals were unaware they had suffered a stroke. It is estimated that silent strokes are five times more common than symptomatic stroke.

A silent stroke differs from a transient ischemic attack (TIA). In TIA symptoms of stroke are exhibited which may last from a few minutes to 24 hours before resolving. A TIA is a risk factor for having a major stroke and subsequent silent strokes in the future.