What happens when you have a stroke? A survivor shares his story. 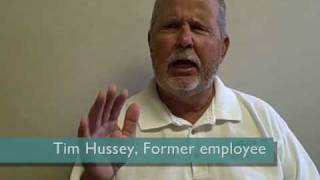 When you work in a hospital, it can be easy to forget that the people you work with everyday, and perhaps even glance past in meetings, could be the same people who one day save your life.

Tim Hussey, a longtime employee of both St. Joseph Health Center and St. Joseph Hospital West, credits the staff and physicians at West for saving his life not just oncebut four different times. Tims story is one of possibilities.

First, he survived a harrowing year in Vietnam as a medic in the U.S. Air Force. Then, after he started work as a respiratory therapist at St. Joseph Health Center in 1971, he met the coworker who would become his wife Joyce, a lovely young phlebotomist. Everything is possible. Then, Tim went on to have a fulfilling respiratory therapy career that he truly enjoyed. He moved to St. Joseph Hospital West when the doors opened in 1986, and cared for respiratory patients on the night shift for the next twenty years…even after he had his first heart attack at age 46, and then a second, and then a third. Everything is possible.

On November 15, 2006, Tim woke up early to another day full of possibilities. He was getting ready to update his respiratory therapy knowledge with some continuing education courses. But his body had other plans. A blood clot broke loose from Tims heart and traveled to his brain. Tim suffered a massive, life-threatening stroke. He was immediately rendered speechless and motionless.

Luckily, Tims wife Joyce recognized the signs of a stroke and immediately called 9-1-1, knowing that time was of the essence. Tim was rushed to St. Joseph Hospital West, a Get with the GuidelinesTM Stroke Center, where the doctors and nurses that Tim had worked with for years worked to save his life. They encouraged his wife to allow tPA (tissue plasminogen activator) to be given to Tim as soon as possible. They explained that the tPA is a clot buster, Joyce recalled. They said had I not gotten him up here, he would have never survived, because the clot in his brain was so big. And you only have a three-hour time window in which to get it. So the tPA broke that clot up and disintegrated that clot.

Slowly, Tim Hussey began to improve. He began talking again three days later. Tim spent a week in the ICU at St. Joseph Hospital West, then a week in the Rehab unit at St. Joseph Health Center. From there, Tim went to outpatient therapy at SSM Rehab for three months. And today, he is a walking testimony to the power of medicineand an exceptional team of health care providers across three different entitities.

I was so happy with my care in every facility, he said. From the radiologists to the doctors and nurses to the therapistseveryone treated me and my family wonderfully. Tim said that he is especially grateful to think that if his life had ended on November 15, 2006, he never would have known the three grandbabies that have come since, and that are now the focal point of his life. A fourth chance to survive a serious medical emergencyfollowed by a chance to meet three of the greatest people youve ever known in the next three years? Everything is possible.

Learn more about having a stroke:
Want to know more about Tims stroke? What exactly happened on that morning three years ago? What did the stroke feel like? How did Joyce Hussey know what was going on? And what has Tims road to recovery been like? Youll find the answers in this four-minute video interview with Tim and Joyce Hussey.