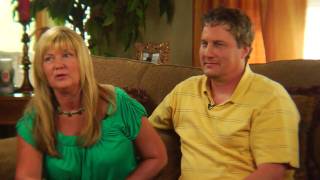 In December 2007, a healthy Tracy Harter and her family were spending the night at a hotel in Lincoln. During the night, Tracy had a bad headache that she thought was a migraine. In the morning her husband, Matt, couldnt wake her. She was transported to a Lincoln hospital where her family learned that she had suffered an aneurysm and stroke. Tracy remained in a coma for about two months.

After another two months in long-term acute care, Tracy was admitted to inpatient rehabilitation at Immanuel Medical Center. The rehabilitation staff helped Tracy learn to eat, talk and walk again. But beyond their physical care for Tracy, they also gave the Harters a great deal of hope and support.

Matt and Tracys 15th wedding anniversary was during Tracys stay there, and the nurses helped Tracy arrange a formal steak dinner for Matt. They even ordered a cake so she and Matt could celebrate together. They brought in a stylist to cut and color Tracys hair. And, they let the Harters four children bring Tracys beloved cat for a visit.

The Harters now consider Tracys caregivers to be close friends. They also appreciate the support of friends and family.

Tracy can now walk with the help of a cane, and continues to do Physical Therapy at Lakeside Hospital. Her goal is to walk without a cane by September 21, 2009, when she and Matt go to see her favorite team, the Boston Red Sox, play in Kansas City.