The Human Bean: 40 days on a tin-bean diet 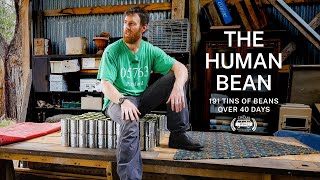 Inspired by a half-page scene in John Steinbeck’s Tortilla Flat, where a family of poor, super healthy kids eat an almost exclusive bean diet, Beau decides to do much the same thing.

Eating only the contents of 191 tins of beans over 40 days transforms Beau into The Human Bean, and in doing so gives him a front row seat into how one food, totally and utterly, dictates how he feels. Beau uses his intimate knowledge of running to compare his former self to his bean-self, logging lacklustre training for an ultramarathon that he plans on running during the final day of the experiment. Epiphanies are had, saddles are blazed, and genuine insight emerges from what is strangely appealing day-to-day of mediocrity.