The '90s Were Cooler, 2-Strokes and Frosted Tips 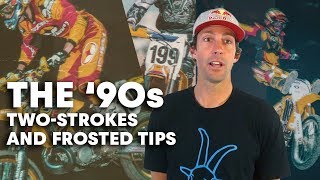 The 1990s. It was the era of dial-up internet, grunge music, MSN chatrooms and frosted tips. And in motocross it was the Golden Age, defined by two-stroke motorcycles, hot pink gear sets, punk rock music and…frosted tips. As Red Bull Straight Rhythm steps back in time with an all two-stroke competition, some of the sport’s greats, including Jeremy McGrath, Travis Pastrana, Jeff Emig and more reminisce about why the ‘90s were just so cool.

Experience the world of Red Bull Motorsports like you have never seen it before. With the best motorsport videos on the web and original series, prepare for your “stoke factor” to be at an all time high.

Get the FREE Red Bull TV apps for all your devices: http://onelink.to/yfbct7