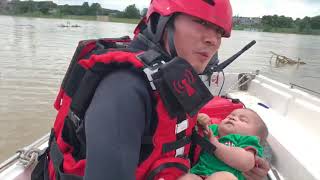 Suining was severely affected by the continuous rainfall in Mianyang, Deyang and other places on the upper reaches of the Fujiang River. Hongjiang Village in Xinqiao Town was besieged by floods, the surrounding roads and fertile fields were submerged and the village became isolated islands in the water. An elderly person living alone in the village fell down at home, and suffered a suspected stroke in critical condition. After receiving the transfer order, the rescue team immediately dispatched four firefighters to the rescue site with an assault boat, Suining City, Southwest China Sichuan Province, 19 August, 2020.