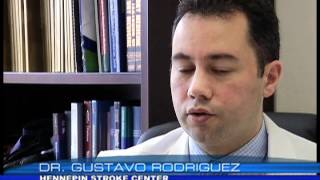 Stroke at any age

Mandi Shimek has been through what many people in their 60s to 70s and beyond experience. She suffered a stroke.

But Shimek isn’t elderly. She isn’t even middle-aged yet.

In March 2010, Mandi Shimek was a hard-working 31-year-old businesswoman. One day, she fell down a flight of stairs at work. Afterwards, she complained of neck and head pain, but otherwise thought nothing of it.

“I was actually in the bathroom and I was washing my hands and my face started to go numb,” she remembers. “Then it kind of traveled down the side of my body and I realized I couldn’t stand anymore and I eventually, I ended up on the floor.”

She was rushed to the hospital. Doctors say she had a series of strokes within the first 24 hours of arriving at Hennepin County Medical Center. In rehabilitation several days later, she had another one.

“On March 17, I had a massive brain stem stroke,” she says. “So that was the biggie. Because that’s what controls your everything. Breathing, circulatory, everything.”

She was in endovascular surgery for about six hours. She says doctors told her they weren’t sure if she was going to survive that day.

Doctors say, it turns out, when she fell down the stairs, she snapped her head back to avoid hitting the wall with her head. That motion caused the equivalent of blunt force trauma to her head, tearing an artery and causing blood clots to go to her brain.

Rodriguez says a stroke can happen to anyone for a variety of reasons. Trauma can lead to stroke, like it did for Shimek. It can also happen to someone who doesn’t have any risk at all.

“Anybody can get a stroke at any age,” says Rodriguez. “You don’t have to have vascular risk factors to have a stroke.”

Rodriguez says about two million neurons may die each minute in a stroke. People who survive a stroke are likely left with deficiencies, such as physical pain and cognitive difficulties.

“With rehabilitation we try to teach other neurons to take over the function of those that died,” says Rodriguez. “It happens to be easier in younger patients. The younger you are, the better you do.”

Shimek is having success doing both body and brain exercises with a physical trainer. Still, she says recovery likely lasts a lifetime. While doctors say she appears to be close to 100 percent rehabilitated, she says she’s not the same as she used to be.

“In my own mind there’s a big difference between pre-stroke Mandi and post-stroke Mandi,” she says. “My memory, multi-tasking. A lot of cognitive difficulties. Finding the right words…. Cold weather wreaks havoc on my body. My entire left side, it’s muscle tense. It’s pain.”

The experience has not only changed her personal life, it has changed her professional life, as well. Since her last stroke, she has left business to pursue a career in counseling psychology. She has dedicated a lot of her time participating in support groups for stroke survivors and being an advocate for stroke awareness.

Her advice for people her age, who might not even have stroke on their radar, listen to your body. For those who have experienced what she has, she says recovery is possible. She says work hard at therapy and know that some people can regain some deficiencies.

“I’m proof that it works because I could still very well be in a nursing facility or a rehabilitation facility. But I was 31 and I had stuff to do.”