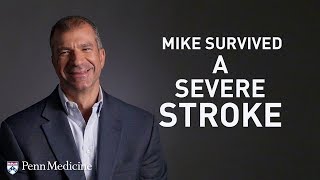 Mike was always an avid runner. Last year, he collapsed while running on his treadmill. His wife found him and had him rushed to Virtua in South Jersey, where he was diagnosed with a very severe type of stroke. Because his case was so complex, he was airlifted to Penn Medicine, where he was treated by a Penn stroke specialists.

Mike recovered and was almost fully back to normal just six days later. Mike credits the joint efforts of Virtua and Penn for saving his brain and his life.