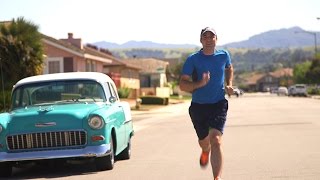 Ryan Kennedy, 29, was airlifted to Stanford so experts here could treat his stroke. The condition is unusual in people his age. Not until doctors showed him a scan of his brain did Kennedy believe what was happening to him. When his first symptoms appeared—sudden dizziness, one-sided facial droop, and inability to speak clearly—he didn’t know what to think. Quick treatment saves brain function after a stroke—Kennedy is back to work and the active life he had before the stroke.