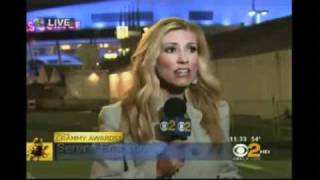 Footage of CBS reporter Serene Branson covering the Grammys Sunday night turned into a clicky video Monday morning, with tweets and blogs gawking at the Emmy-nominated journalist stumbling over her words for a full 10 seconds.