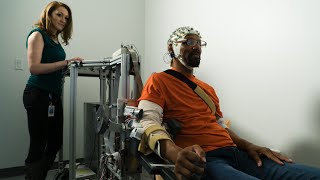 On June 9, Marcia O’Malley, professor of mechanical engineering (MECH) and director of the Mechatronics and Haptic Interfaces (MAHI) Lab at Rice University will take her brain-machine interface (BMI) to Capitol Hill. The occasion is the fifth anniversary of the National Robotics Initiative (NRI) launched by President Obama in 2011.

With collaborators at the University of Houston (UH) and The Institute for Rehabilitation and Research Memorial Hermann (TIRR), O’Malley received a $1.17 million grant from the National Institutes of Health (NIH) and NRI. Their research aims at helping stroke survivors to “think” their disabled limbs into motion.

Accompanying O’Malley to the Washington event will be Jennifer Sullivan, who graduated from Rice in 2011 with a B.S. in MECH, earned an M.S. in the same major from the University of British Columbia in 2015 and now works as a MECH research assistant at Rice.

Along with roughly a dozen other NRI-funded research groups from around the country, O’Malley will attend an expo, luncheon and panel discussion in the Rayburn House Office Building. Also in attendance will be representatives of the Congressional Robotics Caucus, congressional staffers and robotics researchers seeking to understand the impact of this federally-funded research program.

O’Malley and her collaborators have developed a robotic orthotic device that revolutionizes upper-limb rehabilitation. The neurotechnology interprets brain waves and makes it possible for stroke patients to operate an exoskeleton surrounding the arm from fingertips to elbow.

O’Malley’s lab is developing the exoskeleton and the UH team works on the electroencephalograph-based neural interface. The device has been tested by UTHealth physicians at TIRR Memorial Hermann on volunteer patients. Funded through the National Institute of Neurological Disorders and Stroke, it’s among the small number of projects selected by the NRI, a collaborative partnership that includes the NIH, National Science Foundation, NASA and the Department of Agriculture, to encourage development of robots that work closely with humans.