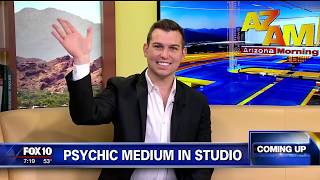 Matt Fraser is the renowned psychic medium and star of the hit television series Meet The Frasers on E! Entertainment. During his LIVE audience readings, Matt gets up close and personal, taking guests on a spiritual journey by reconnecting them with their loved ones in spirit and validating proof of the afterlife in real time.

From heartfelt emotional readings to stunning revelations, Matt Fraser has audiences on the edge of their seats with his outrageous personality and unique approach. His readings lead guests through a rollercoaster of emotions from laughing to crying, turning skeptics into believers with stunning details. His dynamic readings frequently include names, dates, and locations he couldn’t possibly know, only adding to his long-established reputation as one of the most credible evidential mediums working today.

With over a two-year waitlist for private readings, Matt’s uncanny abilities and extreme accuracy have allowed him to build a worldwide clientele of millions from A-list celebrities and influencers, to everyday people looking to get in touch with those they have lost.

The bestselling author of When Heaven Calls and a psychic phenomenon, Matt has caught the attention of major media outlets across the nation including the New York Times, People magazine, and CBS Radio. He has also been a sought-after guest on popular TV shows such as The Real Housewives of New York, Botched, The Doctors, and more.

Connect With Matt on Social Media:

People who are not in the habit of talking with the dead have a hard time imagining what Matt Fraser’s life is like. Based on the questions he gets, they seem to think he spends most of his time sitting cross-legged in a trance, maybe hovering a few inches off the ground, leaving his physical body behind as he journeys across the veil to the spirit realm. But it’s not like that at all.

The real Matt Fraser is just an ordinary twenty-eight-year-old guy…who happens to talk to dead people. Born into a psychic family, Matt carries on the legacy passed down from his late Grandmother Mary by connecting people to their dearly departed loved ones and delivering messages from the other side. His sold-out live group readings, television appearances, and popular private readings have allowed him to bring hope and healing to fans from around the world.

Now, in When Heaven Calls, Matt opens up about his life as a psychic medium—including how he discovered his spiritual gift, what it’s like to connect with souls on the other side, what communicating with the dead has taught him about embracing life, and how you can tap into your own intuitive awareness to manifest your dreams, goals, and desires.

Matt Fraser is his own biggest fan – and for good reason! The 28-year- old is an intuitive psychic medium with a sharp wit, brutal honesty, and a wicked sense of humor. The self-made man believes he has all the answers – and no one, living or dead, can convince him otherwise. Impeccably dressed, well-groomed, Matt’s image can be seen around town blown up to billboard size and plastered on his Cadillac Escalade. Some might call him vain, but Matt just knows what he likes, and how he likes it….and he usually ends up getting it!