Open-heart surgery on an infant 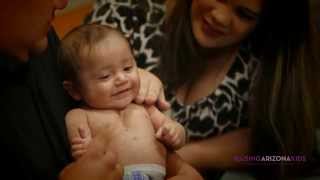 When Mia Andrews, of Mesa, was rushed to Banner Desert Medical Center for an emergency C-section, she had no idea that two lives–her own and that of her unborn son, Dax—were in danger. Andrews was experiencing acute blood loss; then Dax was born six weeks premature with two holes in his heart. Dax was treated in the NICU at Cardon Children’s Medical Center—the children’s hospital on the same campus as Banner Desert—so Andrews was able to visit him as she recovered. Dax, now 5 months old, had open-heart surgery at Cardon Children’s this past January. Banner Children’s cardiology experts are overseeing his ongoing care.