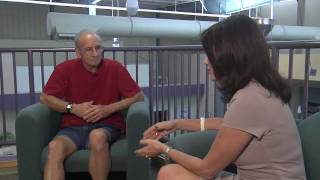 Frank Sullivan suffered a massive stroke in his sleep.

“My wife found me in bed and called 911 and they came and took me to the hospital.”

He was left with lasting damage.

“My speech is definitely different than it used to be, obviously,” says Frank.

Frank is keenly aware of the signs and symptoms of a stroke, and is reinforcing healthy habits to avert having one in the future.

“Despite everything that’s happened I’m still strong and can do just about anything that I want to do,” says Frank.

Research was clear that once someone has suffered a stroke, they’re more likely to have a second. Now new studies find that so-called mini strokes also have long-term implications.

Conventional wisdom was that the TIA or mini stroke was a warning of sorts. After it was over, people would return to normal, knowing they were at risk for a major stroke. But the latest research shows there may be lasting damage.

“There are worries, and there are many people researching, that there is a permanent damage, microscopically, there can be permanent changes on scans,” says Dr. Levine.