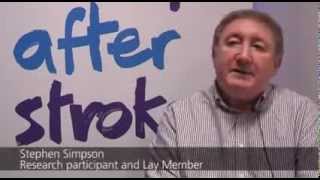 Stephen Simpson’s life changed forever when in the summer of 2006, aged just 51, he suffered a stroke that left him temporarily paralysed, wheelchair-bound and hospitalized for three months. Stephen had to give up his job as a managing executive for a large company and saw his role as an active father of four change dramatically. However, as part of Stephen’s rehabilitation he became actively involved in research which gave him a new lease of life. www.FocusOnStroke.nihr.ac.uk