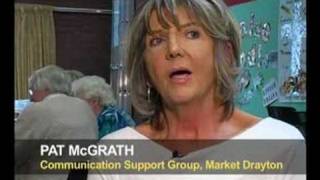 Stroke clubs play a vital role in improving the lives of many people affected by stroke, providing a meeting place for people who have had a stroke, and their carers. Stroke clubs give members the chance to share their experiences and take part in activities that can help with their ongoing recovery. The Stroke Association presents this award to a stroke club that has made a real and positive difference in its community.

WINNER: MARKET DRAYTOn & DISTRICT STROKE CLUB
The Market Drayton and District Stroke Club has been based at the local Methodist Church Hall for over 15 years and currently has 30 members. The club meets monthly and provides a range of support activities, including group discussions on local community issues, games and social activities, health and stroke support topics and arts and crafts projects. The club has also been instrumental in supporting the West Midlands Stroke Research Network in a number of pieces of research into stroke.

Last year the club became particularly concerned that there was no specific support for stroke survivors with aphasia and their carers in Shropshire. Aware that no money would be forthcoming from the local Primary Care Trust, the club decided to form a new self-sustaining sub-group of the stroke club specifically to address the lack of services for these very isolated people and their families. Working totally on their own initiative and with a small amount of funding to provide training through the local speech and language therapy department at Whitchurch Hospital, a group of volunteers worked hard over six months to establish their skills before getting underway with five stroke survivors with aphasia and their carers in March 2007. Since then the group has met fortnightly and is going from strength to strength. Never standing still and always looking for new ways to stimulate and support stroke survivors, the club’s next big plan is to establish a therapeutic art group.