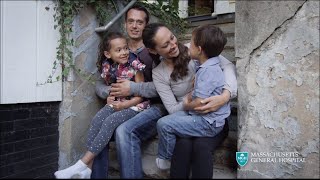 As a fitness instructor, Jessica Diaz never thought she’d face a stroke—especially at such a young age. But after teaching two morning classes, she felt a shooting pain travel down the left side of her body. After a visit to the Emergency Department, Massachusetts General Hospital doctors determined that Jessica had a stroke and was lucky to be alive. Further testing revealed that the stroke had been caused by a small hole in the heart, which had allowed a blood clot to travel to her brain. As a young and active mother of two, Jessica worked with a team of Mass General doctors to not only repair her heart, but determine a treatment plan to minimize future health risks.