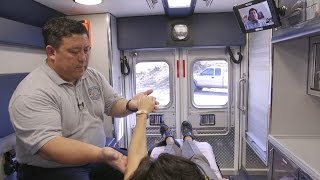 A clinical trial testing mobile videoconferencing as a means for physicians to diagnose stroke patients while they’re being transported to the hospital, has found that a tablet-based system produced diagnoses highly correlating with a bedside assessment — a finding that could have important implications for the early treatment of stroke and for preventing the disability it causes.

iTREAT
The Improving Treatment with Rapid Evaluation of Acute Stroke via Mobile Telemedicine, or iTREAT, study used a low-cost, tablet-based system that allows physicians to be in the ambulance, virtually, with patients who are being transported. The iTREAT kit contains a tablet suction-mounted to the wall of an ambulance, a portable modem and antenna, which allow an encrypted form of video consultation between a neurologist and the stroke patient, as well as with the EMS provider.

“In our initial feasibility testing, we partnered with rural ambulance agencies to allow enough time for the stroke assessment and tested our mobile telestroke system in simulated stroke scenarios,” explained Andrew Southerland, MD, the head of the University of Virginia Health System team that conducted the study.

The study found that more than 90 percent of the test runs conducted locally had sufficient quality and audiovisual connectivity to perform the consultation. The researchers determined that stroke testing results were 98 percent correlated with assessments that would have been done at the bedside. In other words, iTREAT was just as accurate as a bedside assessment by a neurologist, which would allow for better transport decisions by the EMS team and potentially faster treatment of the patient once at the hospital.