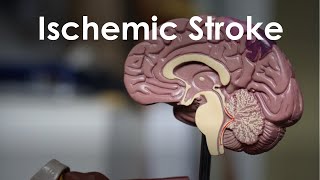 Today we are looking at ischemic stroke and transient ischemic attack for USMLE Step 1 and Step 2.

PATHOGENESIS
Emboli is a major cause, which may be cardiogenic or
Cardiogenic emboli leads to atrial fibrillation or atrial flutter. Mural thrombus occurs after an Myocardial infarction which forms an emboli in the left ventricular. Stroke may also be due to Valvular causes either prosthetic valve, rheumatic valve, vegetations. If there is a patent foramen ovale a stroke may also occur from a DVT.
Artery to artery emboli can be from plaques located in Aorta and Carotid Artery and are audible on auscultation as a bruit.
Thrombus may also be a cause of stroke that forms in carotid and vertebral artery. They decrease blood flow to the brain. Thrombus in the intracranial arteries, such as circle of willis, may also lead to eventual ischemic stroke. Lacunar infarcts occur in smaller vessels secondary to hypertension. With chronic hypertension develops lipohyalonis and fibrinoid deposition which eventually occludes the artery.
TIA lasts less than 24 hours, but now defined more as whether or not infarction has occurred. TIA also increases the risk of future stroke and is associated with syncope, amnesia and seizures. Must differentiate multiple sclerosis, brain tumor, brain abscess and intracerebral hemorrhage.

STROKE SYNDROMES
Stroke in Internal Carotid Artery is usually due to atherosclerotic plaque, but are generally asymptomatic because of compensation from circle of Willis. However, patient may still experience monocular blindness and a bruit.
Strokes in the anterior cerebral artery (ACA) affect the lower extremity, abulia and urinary incontinence.
Strokes in the middle cerebral artery (MCA) affect the upper limb and face as well as speech, decrease conjugate gaze, homonymous hemianopia.
Lacunar strokes present with pure motor or pure sensory loss, ataxia, clumsy hand.
Vertebral artery strokes are divided as extracranial which is known as the subclavian steal syndrome, and intracranial strokes affect the medullar oblongata.
Anterior Spinal Artery Strokes
Lateral Medullar Syndrome aka Wallenberg Syndrome, PICA syndrome have ipsilateral pain and numbness in the face, diplopia, vertigo, nausea/vomiting and Horner Syndrome. On the contralateral defect in pain and temperature in the body.
Medial Medullar Syndrome is due to stroke in the anterior cerebellar artery. Ipsilateral tongue paralysis due to 12 cranial nerve. Contralateral paralsysi and decrease proprioception due to pyramidal and medial lemniscus.
Basilar artery strokes leads to locked in syndrome and there is no volitional besides moving their eyes.
Strokes affecting the midbrain include CN 3 and so they will have down and out. If there is contralateral hemiplegia is known as weber syndrome. Benedikt Syndrome there is additional gait abnormalities.
Posterior Cerebral Artery strokes have visual problems and homonymous hemianopia with macular sparing.

MANAGEMENT
Start with the airway, breathing, circulation. Then check blood glucose and ABG that might mimic strokes. Non-contrast CT within 25 minutes to rule our hemorrhage, which will require surgery. Then begin thrombolysis or thrombolectomy. Contraindications for thrombolysis include, history of stroke or head trauma, atriovenous malformation, aneurysm, recent surgery, hypertension, hypoglycemia, internal bleeding, coagulopathy. Must be given less than 3 hours. Thrombolectomy only up to internal carotid artery.
Then determine the cause with Doppler ultrasound of carotid or vertebral artery. CT Angiography or MRA looking for thrombus of smaller arteries and distinguish where the lesion or stroke occurred. Transcranial Doppler helps identify in MCA, ACA, PCA strokes.
Cardiac evaluation to look for emboli in the heart with echo, ECG, lipid levels.