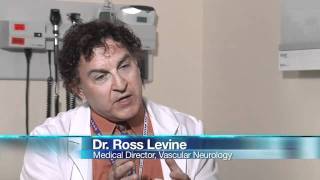 “In ten days I had a total of three massive strokes.”

Phyllis Rollins is pretty confident as to what caused her debilitating stroke.

“Smoking caused my stroke. They found a block in my brain and it was 89 percent nicotine,” says Phyllis.

But many people never suspect they had warning signs too. In younger patients, even slightly elevated blood pressure can increase a person’s risk of suffering a stroke.

Studies show even pre-hypertension elevates risk. Meaning people with systolic blood pressure, or the top number is between 120 and 139 and the diastolic number, or bottom number is between 80 and 89, had a 55% increase of having a stroke compared to adults within the normal range.

“So if they’re younger, it’s especially risky because that might be their only condition and their only treatable condition,” says Dr. Levine.

Stroke, which is sometimes called a brain attack, occurs when the brain is denied oxygen. So elevated blood pressure has long been linked with clogged arteries.

“If arteries are harder, like a lead pipe, its going to take a higher pressure to get the blood pumped past those blockages,” says Dr. Levine.

Much like the health awareness surrounding cigarette smoking, it’s hoped people will recognize their blood pressure is a rising risk factor for stroke risk.

“It’s risky for everyone, its not to be ignored,” says Dr. Levine.