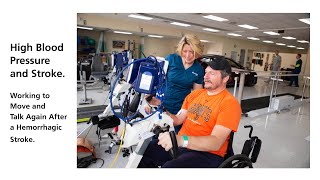 Forty-six-year-old Carson City resident, Sean Olsen, was working when he thought he began to slur his words. He intuitively knew he was having a stroke. His co-worker drove him to Carson Tahoe Hospital when staff determined he was having a hemorrhagic stroke. During a hemorrhagic stroke, blood from an artery begins bleeding into the brain. This happens when a weakened blood vessel bursts and bleeds into the surrounding brain. Pressure from the leaked blood damages brains cells, and the damaged area is unable to function properly.
“His blood pressure was so high that they told us he needs to be up at Renown, so he rode Care Flight here” says Olsen’s wife, Tara Olsen. Olsen spent about a week in the Intensive Care Unit and Neurology before he was admitted to the Renown Rehabilitation Hospital.
“They did the right thing by getting Olsen to the closest hospital as soon as possible,” says Stroke Program Director, Valerie Brooke, MD. “As soon as you find out it’s a hemorrhagic stroke you actually need to go to a center that has a neurosurgeon. The neurosurgeons at Renown Regional Medical Center were immediately consulted because the blood builds up in the brain and there is the potential that you will need brain surgery.
“It’s not that he had a tumor or an aneurysm, his hemorrhagic stroke was caused from high blood pressure,” says Brooke.
The most common type of stroke is an ischemic stroke. It is caused by a blood clot that develops in the blood vessels in the brain or a blood clot or plaque debris that develops elsewhere and travels to the brain.
When Olsen arrived at the Rehab Hospital he couldn’t walk on the left side and he couldn’t talk.
“We’ve been here 5 1/2 weeks. Everybody is so kind to us. We’ve gotten to know everybody. And the care is amazing. This place is an amazing place,” says Tara Olsen.
It’s humbling,” says Olsen. “I’m looking forward to getting back to life as we knew it.”
Olsen regained his speech and a lot of his left side movement before leaving the Rehab Hospital to continue out-patient physical therapy when he returned to his home in Carson City.
With the regions only Comprehensive Stroke Center and CARF Accredited Stroke Rehabilitation Program, Renown Health is connecting lifesaving stroke care with cutting edge stroke rehabilitation.