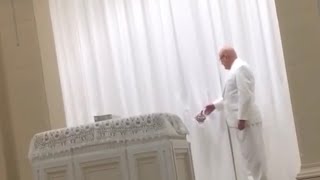 If you’re looking for the movie, “We will go down”, starring University of Utah alum and award winning adult film star, Christie Stevens, you’ve come to the wrong place. This is just hidden camera footage of part of a secret Mormon ceremony recorded in a Mormon temple in Arizona in 2016. Sorry.

This video shows the part of the Mormon temple endowment ceremony commonly referred to as “the instructions at the veil”. Mormons believe that they will be required to give Masonic handgrips before entering the Celestial Kingdom (aka Heaven) to the angels that stand as sentinels. Only Mormon adults are allowed to participate in this ceremony. In fact, a vast majority of Mormons under the age of 18 have no clue what adults do in their temples. They’re told it’s “too sacred to talk about”. I’m not kidding.

In August, 2012 I posted the first hidden camera video of Mormon temple rituals online. It was a nearly six minute, poorly focused clip of the instructions that are given at the veil that I recorded with a well concealed iPhone in the Jordan River Temple in South Jordan, Utah.

Four years and over 3.5 million views later, I thought I’d remake that original video with a significantly higher quality version. This time the hidden camera recording was done in the Phoenix Arizona Temple in June, 2016.

My original 2012 video, titled, “Episode 1: Mormon Temple: Veil Instructions” can be seen here: https://youtu.be/Xg2bxBHbsIU [NOTE: The AOL email address shown at the end of the 2012 video is no longer valid.]

[Phone calls may be recorded for quality assurance purposes.] 😉😈

For more information about Mormonism visit the following links:

Subscribe to my channel to be the first to see new videos exposing Mormon temple rituals and Mormonism in general.