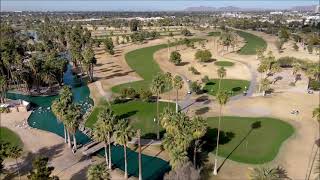 Just a few blocks away from Phoenix’s busy central corridor, Encanto Park is a sprawling 222-acre lush oasis found in the very heart of the city. Inspired by Balboa Park in San Diego and Golden Gate Park in San Francisco, Encanto Park is the brainchild of William G. Hartranft, a millionaire philanthropist and President of the first Phoenix Parks and Recreation Board. Starting out as the Doris-Norton Park in 1934 when the land it spans on was acquired from J.W. Dorris and Dr. James C. Norton, it was a scenic conglomeration of palms and deciduous trees assembled around winding lagoons and canals. This picturesque public park initially featured a clubhouse, playgrounds, an archery range and a golf course designed by William P. Bell but has now grown to include picnic areas, boat house, swimming pool, nature trail, urban fishing and a second golf course.

Park construction ran from 1935 to 1938 and was overseen by the Works Progress Administration. During those three years, the clubhouse, lagoon, boat dock, 18-hole golf course, band shell, playground areas, tennis and horseshoe courts, and archery range were completed. The Encanto Park Clubhouse & Boathouse featured a Spanish Mission Period Revival architectural style while the lagoon carries the distinction as the first recreational water feature developed in a local public park in Phoenix. Notably, the 18-hole golf course happens to be the third oldest golf course in Arizona.

A 99-year deal was struck between members of the Valley Garden Center and the city of Phoenix in 1946 for the lease of a three-acre strip of land south of Encanto Park for $1. The center was opened in early 1949 and hosted two large gathering rooms, a kitchen, nearly three-acres of lush grounds and a 100-year-old mesquite tree. To this day, the center’s garden proves to be a favorite setting for meetings, weddings and receptions.

Around two decades later since construction began, Encanto Park was updated with a swimming pool, tennis courts, softball field and two lagoon bridges accessing Enchanted Island Amusement Park located on Picnic Island. The next improvements were done in 1982 when the south side was renovated with new game courts replacing the archery range, and parking and play equipment getting added. The north side was then revamped in 1986 with the renovation of the lagoon and channel system as well as the addition of new restrooms, sidewalks, area lights, play equipment and a boathouse.

In between these updates, 100 acres of the park which includes the golf course and lagoons were recognized in 1984 in the National Register of Historic Places as part of the Encanto-Palmcroft Historic District. In addition, Encanto Park has been designated as a Phoenix Point of Pride.