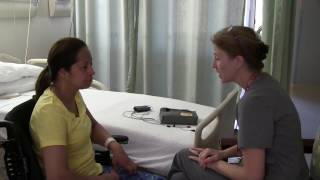 Rosa was admitted for rehabilitation after a stroke in an area of the brainstem that can cause severe swallowing problems, known as dysphagia. This stroke also caused one of Rosa’s vocal folds to be paralyzed, further complicating safe swallowing. She was on a very restricted diet that consisted of pureed solids and liquids the consistency of honey. Rosa was committed to trying anything that might help her eat regular food again, so her speech language pathologist started a vigorous exercise program coupled with VitalStim® Therapy.

Strategies such as small bites and sips, slow rate and turning her head to the left when swallowing enabled Rosa to expand her diet. Vitalstim® Therapy was utilized both with and without eating to improve her strength. Videofluoroscopy and Fiberoptic Endoscopic Evaluation of Swallowing (FEES) as needed allowed Rosa to progress quickly in a short period of time.

Rosa’s strength improved so much that she was able to leave HHH eating and drinking whatever she wanted, with no need to turn her head while eating anymore. She was ready to go out to eat with her family!