Clot-Busting Drug Stops A Stroke In Its Tracks 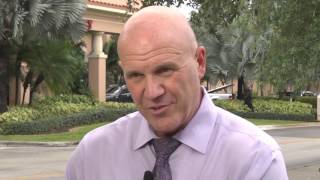 Healthy and fit, Miami-Dade County homicide detective David Denmark doesn’t seem like a typical stroke victim. “For you to ask if I thought I would have a stroke, I would tell you definitely not. I ate healthy and worked out every day,” Mr. Denmark said. One evening last June he began slurring his speech and losing motor control. “I could not move, I could not open my eyes because of the vertigo. I said ‘this is my time, this is the way I’m going to go out.’”

He was transported to Baptist Hospital, a designated comprehensive stroke center. He was quickly evaluated by a specialized stroke team led by Sergio Jaramillo, M.D., a neurologist with Baptist Health Neuroscience Center.

“We obtain a CT scan of the brain, we assess the patient neurologically and come up with a score that tells us how severe the neurological deficit is and if we think the patient is a candidate for an acute treatment,” said Dr. Jaramillo. The scan revealed an ischemic stroke caused by a blood clot blocking the flow of blood to Mr. Denmark’s brain. He received the intravenous drug tPA, (tissue plasminogen activator), which breaks up blood clots.

“After the administration of the tPA, I started to move my left hand again and I felt tingling,” Mr. Denmark recalled. When he began to regain movement in his limbs, “Everybody was clapping, everybody was high-fiving each other. And that’s when I was like, ‘I might be O.K. here.’”

When it comes to strokes, time is of the essence. Mr. Denmark arrived at the ER well within the three-hour “window” between the onset of symptoms and treatment during which tPA can be effective.

“David responded remarkably well. Within 24 hours all of his neurological symptoms had resolved,” Dr. Jaramillo said. “If he hadn’t come to our comprehensive stroke center there likely would have been some kind of neurological permanent deficit and he would have had a negative effect on his quality of life.”

Mr. Denmark knows how lucky he is. “Every day I wake up and I can move freely, I constantly think what it could have been like. Everyone at Baptist saved my life and I’ll never forget that.”