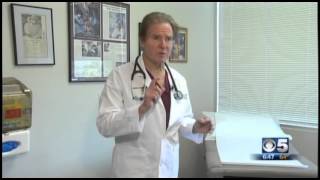 Dr. Richard Heuser with Phoenix Heart Center has pioneered a technique to clear blocked arteries – without a hospital stay. “Even in patients that have had 100% blocked arteries, we have the patient go home usually about two or three hours after the procedure,” says Dr. Heuser.

Dr. Heuser also shares tips for lowering risk for heart disease: “If you lose five – just five – percent of your body weight, markers in your body of inflammation, of risk for stroke, risk of heart attack can literally be reversed. For instance, if you lower the high number on your blood pressure by as little as two millimeters, you’ll reduce your likelihood of a stroke by ten percent – reduce your likelihood of having a heart attack by seven percent.