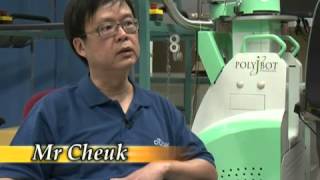 A biomedical engineering team from Polytechnic University has developed an innovative device that is proving to be a godsend for patients recovering from a paralysing stroke.

During therapy, the stroke patient dons a helmet hooked up to a computer which records his brain activity, and has sensors hooked up to his arm and the computer to pick up muscle signals. A robotic arm is then placed over his paralysed hand. The helmet picks up brain signals and shows which areas of the brain the patient is using. To move the robotic hand, the patient must concentrate and use the correct parts of the brain to send signals to his hand.

Prof Tong sees this as an advantage the Brain Training Device has over other stroke-rehabilitation methods.

“Conventional physical or occupational therapies focus on stretching and repositioning of hands and wrists, to minimise the abnormal postures and reduce contracture of the joints. It is just passive training because the brain is not learning the functions.”

Persistence pays
One of the volunteers to test the device is Mr Cheuk, who lost all movement in his left limbs after he had a stroke a decade ago. Since then, he had regained most of the use of his leg, but not his hand. After 30 brain training sessions in the last year, he has seen significant improvement in his ability to move it.

“Now, I can help my wife to wash dishes. Also, I have confidence to climb a ladder to replace a lightbulb at home. Before, I wouldn’t even try to do this because I was afraid I would fall.The treatment increased my confidence.”

Mr Cheuk is keen to try any new innovations that will help in the lifelong rehabilitation process.

“As long as I am still alive, there is still hope that I can recover. I hope I can undergo the training again, to see whether there will be even greater improvement. I believe the device will be even more useful for new patients, and they may recover faster.”

Prof Tong’s research team received $2.7 million in support from the Innovation & Technology Fund to develop the device. After a second trial in the coming months, the system will be tested in hospital next year.

Each set of equipment costs about $100,000, which is relatively inexpensive compared with other medical devices. The team will continue to simplify the device, so that in future, patients may rent one for use at home.

Stroke is the leading cause of disability in Hong Kong, Prof Tong noted. With an increasingly ageing population, the problem is growing more serious. He hopes the Brain Training Device will bolster stroke rehabilitation, reducing the burden on society as stroke patients recover. Helping them has been his long-term aspiration.

“When I was in secondary school, I did volunteer work at the elderly centres, and met many stroke patients who could not take care of themselves. They told me all they wanted was to regain independence. That became my dream, to develop something to help them.”

The Innovation & Technology Fund has been supporting such applied research and development for 15 years. The 2014-15 Budget includes a proposal to establish an Enterprise Support Scheme to support private-sector companies with a $10 million funding ceiling for each project. This aims to boost research and development investments and commercialisation activities. (http://j.mp/1laqRDn)