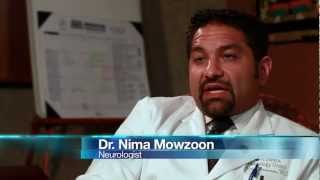 You may hear stroke referred to as a brain attack. The term is used to bring attention, in the same way heart attack describes a cardiac event, in progress.

“So a stroke is when there is a sudden occlusion or clotting up of an artery in the brain, and when that suddenly happens, the part of the brain that receives blood supply from the artery then gets damaged. And that damage is stroke,” says Dr. Nima Mowzoon, neurologist on Lee Memorial Health System’s medical staff.

The most common form is a dry or ischemic stroke. That’s what happens when the blood supply going to the brain gets blocked.

“Just like the carotid arteries in the heart, the blood vessels in the brain can have atherosclerosis which starts off from cholesterol plaque. Cholesterol plaque is not regular and that irregular surface will then lead itself to making blood clots and that sudden information of that blood clot in that carotid artery can start a stroke,” says Dr. Mowzoon.

Blood clots can also travel from somewhere else and cause a stroke. Other times, people may suffer what’s called a mini-stroke or TIA.

“If that blood clot breaks up and dissipates, the artery will open up, and the blood supply comes back. So the symptoms go away. That’s called at TIA or a Trans Ischemic Attack,” says Dr. Mowzoon.

Many times people don’t get a warning and instead suffer an acute, or sudden stroke. Getting help immediately in the form of clot busting drugs may prevent permanent damage.

“Their window of time is three hours, and for some people four and a half hours, but we know that the sooner we get that medicine the better the results were going to have,” says Dr. Mowzoon.

TPA or clotting medicines given in the first hour offer better outcomes than when given in the second or third. So it’s important to act quickly and call 911. Because with a stroke, time lost is brain lost.