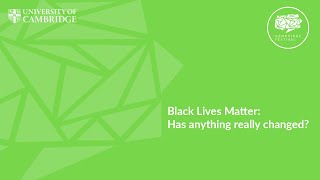 “It has been nearly a year since the shocking death of George Floyd, triggered protests around the world and calls for actions rather than words to tackle racism. So, has anything fundamentally changed in that time? How much have governments, institutions, the media and society generally taken those calls on board?

Go to www.slido.com and enter code A093 to participate in a live Q&A with the speakers.

This panel will hear from Pragya Agarwal, an award-winning behavioural scientist and author of SWAY: Unravelling Unconscious Bias, who will talk about her work on unconscious bias as well as her forthcoming book on talking to children about race; Kehinde Andrews, professor of Black Studies at Birmingham university, activist and author of books including The New Age of Empire: How Racism and Colonialism Still Rule the World; Ali Meghji, Lecturer in Social Inequalities at the University of Cambridge; and Monica Moreno Figueroa, Senior Lecturer in Sociology at the University of Cambridge, who will talk about the role of education and decolonisation of the curriculum. Chaired by Kamal Munir, Reader in Strategy & Policy at the Cambridge Judge Business School.”