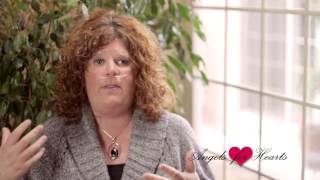 Angels for Hearts a Non Profit, founded by Kimberly Kaufman and her parents who realized after their adult daughter was diagnosed with Congestive Heart Failure at the age of 29 in 2004 and then in 2006 was told she was not a transplant candidate. Kimberly realized after seeing some young children in the adult Cardiac ICU that she could not help herself but maybe she could help others, so from that the story of Angels for Hearts started. Kimberly calls not getting heart transplant her blessing in disguise.