An Amazing, Emotional Recovery From Stroke 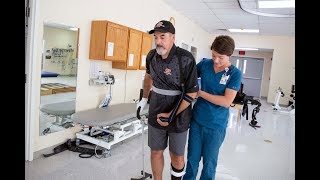 “Those first steps were unbelievable. There were a lot of people there, because I’d been there for so long, who were routing for me. I almost had to stop because I was crying so hard. Everybody was crying,” says Renown Rehabilitation Hospital Stroke Patient, Steve Valenzuela.
Valenzuela, a resident of Tonopah, Nevada was spending a normal evening at home when he fell from weakness in his leg. He managed to get himself to his kitchen and take a couple of aspirin. He went to bed, go up and went to work. Then the weakness returned even stronger.
Valenzuela didn’t know he was having a stroke.
He ended up at Renown Regional Medical Center in Reno, but it was too late to give him treatments that could have possibly stopped the stroke’s damage.
After Valenzuela spent days in the Intensive Care Unit to prevent another stroke, he was admitted to the Renown Rehabilitation Center. He lost movement in his left leg and arm from the damage to his brain.
“Even though there was a part of Steven’s right brain that was damaged from the stroke, highly intensive therapies, challenging task specific, three hours a day of therapy in the first month to three months after the stroke has the greatest opportunity for the brain to make new connections around the injured area of the brain,” says Stroke Medical Director, Valerie Brooke, MD.
Valenzuela worked with the physical, speech and occupational therapists nearly every day for three months to regain his cognitive skills and movement to his leg and arm.
“He’s really motivated to make as much progress and regain as much independence as he can,” says Physical Therapist Monica Thomas. While the movement is his arm has been slower to return, he has made a lot of progress walking.
“Some things he still has trouble with, some moment on that left leg. The exoskeleton forces him into the correct pattern we are looking for and gives him cues that we are unable to do otherwise,” says Thomas.
Brooke says, “He has worked incredibly hard, He’s inspiring to watch work.”
“It gets a little bit easier every day. It’s just a lot of repetitions. They told me that it takes a thousand repetitions to learn how to walk again,” says Valenzuela.
“I just can’t believe how good the staff is here. Every one of them has the same thought and that’s to get you better or whoever they are working with better and get them up and running.”
#renownhealth